Z 750 - Accessories in carbon and fiberglass 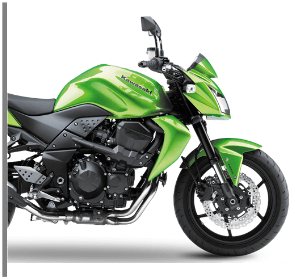 The Kawasaki Z 750 has been produced in several series, the first series from 1976 to 1989 in five versions, normal (without final abbreviation) "L", "GT", "sport", "LTD" and "Turbo", with this displacement there is an electric starter instead of a pedal as on smaller displacements. The normal model was a powerful naked bike with good finishes and a large tank, the "L" version was slightly heavier, but it was almost the same, in fact it replaced the normal version, the "GT" and "sport" versions were very similar to the "L" version, but they mounted a different tank, which in the "GT" was 24.5 liters, so as to allow tourist travel. The Z 750 from 1982 was the model that marked a real turning point in modernity, creating a strong acceleration in model competition in Japanese competition. This was a very powerful but at the same time comfortable motorcycle with its large saddle, it carried two large disc brakes at the front, 4 cylinders with four carburettors and two side exhausts. Very rare to find today, but highly sought after on the classic motorcycle market. The "LTD" model was the chopper version of the Kawasaki Z 750, which in addition to the different handlebars, with 19 front tires and 16 rear tires had a tank of only 16 liters. The turbo version was instead the most powerful and sporty variant of the model, which in this configuration had the addition of a half-fairing, while the tank became only 18 liters, due to the size of the turbo, due to the performance the two rear shock absorbers are replaced by the monoshock. The second series runs from 2003 to 2006. The third series, which among the main modifications has a shorter tail, a redesigned mask and the Euro 3 homologation which limited the maximum power to 106 HP, entered production from 2007 until today.(See information on Wikipedia)